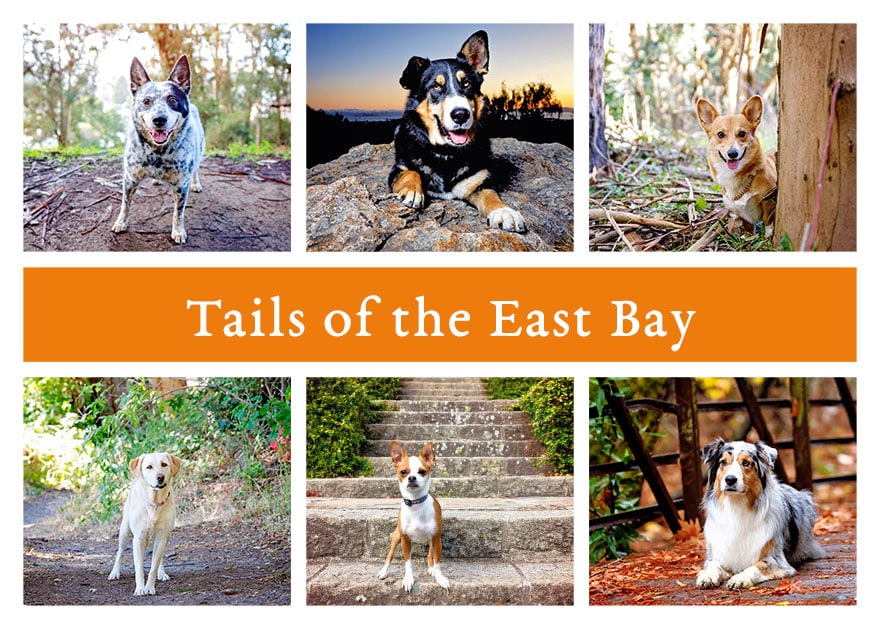 For years now I’ve been contemplating a book project where I could raise funds for local animal rescue, but I got distracted by life, my former full-time Corporate America job, and not really knowing where or how to start a project like this.

Last year I decided to get serious. I mapped out the details for a series of books called “Tails of the East Bay” which would celebrate dogs that live, work, or play in the East Bay. In summer 2019 I finally pulled the trigger on the first book in this ambitious project that would focus on locations along the San Pablo Avenue corridor.

My original goal was to photograph 100 dogs in 6 months. Well, we didn’t quite make that but I did photograph 60 dogs and am very excited to announce we raised $3,000 for Milo Foundation. Believe me, it was so exciting to deliver that check to Lynne, Milo’s director, and founder.

I want to thank Lynne and the rest of the Milo crew who helped me promote the project. And a huge, enormous, greatest biggest shout out ever to the humans who reached out, made the donations, and let me photograph their amazing furry best friends.

The culmination of this project is publishing the first book where we get to show off the dogs (and one cat) who strutted their stuff, posed like pros, gave oodles of kisses, and made this project a joy for me each day.

The current pandemic notwithstanding the book should be published in June and will contain 60 dogs, 1 adventurous cat, and 34 East Bay locations ranging from Crockett to Oakland.

Before I introduce you to a handful of those soon to be famous snouts (you’ll have to wait for the book to be published to see the rest) I have a second announcement.

I am kicking off book 2 this summer! And I’m searching for another 60+ dogs to photograph, so if you missed the first book now is your chance. This second book will have locations ranging from Martinez to Pleasanton, Alameda to Pinole. And this time donations will go to 1 of 3 local shelters, participants will pick where they want their donation to go. To learn more or register your pup, click here.

First up, meet Lefty. An exuberant Cattle dog mix with a ton of personality and an oh-so expressive face! His session was at a couple of the beautiful murals in Jack London Square. Lefty was a treat to work with and wait …did I say treat? Because Lefty is a BIG fan of treats.

Next up is Ender, a Korean Jindo, Siberian Husky Mix. He was a bit hesitant at first and checked me out to make sure I was ok to be around his human, but I passed the test and he was more than cooperative. He showed off his rock climbing skills at Indian Rock in Berkeley.

I met Chloe and her human at Albany Beach one late fall afternoon. Chloe is a total sweetheart and loves to show off her bright smile. I would never have guessed that she is 10 years old they way she runs in the sand.

Colby has the distinction of being the only Golden Doodle in the book. We met one morning at Mountain View Cemetary with his bestie Humphrey (wait for the book to meet that cutie!) and when they weren’t playing tug of war we captured his sweet face posing in the falls leaves.

Next, we have Daisy, another one, and only in the book, a Golden Shepherd. She is a beauty who was willing to pose for me as long as I kept my distance. She is a rescue with an unhappy past who has found her loving family and takes making sure they are safe very seriously. She also has a brother from another mother you will meet in the book.

Louie is a past client of mine and his session was at Flowerland in Albany. He has a very distinctive face, don’t you think? His humans say Corgi-Spaniel-Beagle-Mystery mix. I say he is a superstar!

Then we have Lucious, who holds a soft spot in my heart. I met him when he was only 7 weeks old. A tiny little Blue Nose Pitbull Terrier who snuggled on my lap. Now at one year old he no longer fits in anyone’s lap, and his favorite past time is swimming in the waves.

On the opposite end of the size spectrum, we have Lulu, a Toy Aussiedoodle. She may be small, but she has quite a big personality and ball obsession. We played fetch down at the Richmond Marina and she occasionally stopped long enough to pose for me.

When Millie’s mom signed her up for the project and told me she was a Dauschund Lab Mix I couldn’t wait to meet her and see what she looks like. And as it turned out she looks exactly like what you might expect. She was such a doll and a great model down at Albany Bulb.

Mimi stole my heart the moment I met her. What a great pup to work with. I fell in love with those ears and the eye patch, so great. A summer session at Mountain View Cemetery in Piedmont and this has to be one of my fav shots ever.

I was pretty excited when Quigley’s owner contacted me and suggested we have his photoshoot at San Pablo Dam Reservoir, as she is an EBMUD park ranger and could take me to a few secret spots in the park for our session. Quigley did a great job as a model even though we could hear coyotes howling in the distance and it was clear he wanted to go investigate, but he is a good boy and listened to mom instead.

I’ve had the pleasure of working with Remi multiple times in the past. I love his face and always want to snuggle him! He and his new brother, Cy met me at the Emeryville Marina. Don’t you just love how he is chilling and enjoying the view?

Navy is a Black Mouth Cur and he and his sister Roux were my first time working with this breed. I loved this image of his big ears flopping in the breeze at Jack London Square.

My session with Sadie was delightful although it was super windy that day. She didn’t seem to mind, though I can’t say the same for my assistant who had to hold the off-camera flash and modifier without blowing away! Her sunset location was Ferry Point in Richmond and you can follow her life on Instagram at sadie_and_penny_rescue.mutts.

Tommy is a big, exuberant, playful, and exceedingly friendly Belgian Malinois. He wanted to say hi to everything and everyone at the Emeryville Marina that morning. He sure does know how to strike a pose!

I think Mojito has, hands down, the best name of all the pups in the book! We snuck into the Berkeley Rose Garden for his portraits, shush don’t tell anyone! He is another little dog with a big personality and a penchant for showing off his outfits (which I saved for the book). You can follow is daily life on Instagram at mr.mojitoooo.

Lastly, we have Diego, the cat! I hadn’t considered including cats in the project, but when his human reached out to me and told me how he goes on daily adventures and has his own Instagram account (diegoedwinparfitt), I couldn’t resist meeting him. And in case you’re wondering, nope I did not photoshop out the leash from this image. Here he is enjoying a tree eye view at the San Pablo Dam Reservoir.

OK, so that is all the tease you get for now.  Stayed tuned for details about the book were you can meet the rest of the wonderful pets of Tails of the East Bay.PARTICIPATE IN OUR NEXT BOOK
INTERESTED IN A PRIVATE SESSION?